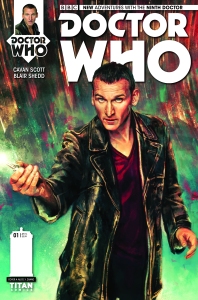 The Ninth Doctor is back with a brand-new miniseries: Weapons of Past Destruction!

Leaving World War II behind, The Ninth Doctor, Rose and Captain Jack discover that Time Lord technology, lost in the wake of the Time War, is being sold on the intergalactic black market!

Now the threat of a new temporal war brews on the horizon. Can the Doctor stop history repeating itself?

When Titan announced their new Doctor Who comics, I was hopeful for a 9th Doctor series. After all, he’s the one who got me into the series this time around and he is my favourite of the ‘new’ Doctors. I couldn’t have been more excited when it was announced we were getting a five part mini series, not only with the Doctor and Rose, but Captain Jack rounding off Team TARDIS. The comic fits in nicely with the series as its clear when Mickey meets up with the trio in Cardiff that they’ve had many adventures together. The possibilities are endless. Perhaps the most interesting thing for me, is that this comic series sees The Doctor traveling with a very human, very mortal, pre-Torchwood Captain Jack. Its something we have rarely seen outside of the 9th Doctor series and something I want to see more of.

Issue one of this five part series plays out like the opening of an episode. Well paced action and exchanges between the characters as you would have seen on the TV show. Writer Cavan Scott has captured the voices excellently.

The Doctor is taking Jack and Rose to the planet Excroth, only when the TARDIS lands, he discovers the world is nothing more than rubble. While the Doctor is trying to figure out what happened to the planet, the TARDIS gets pulled aboard a ship that appears in space. There they discover to warring factions which they try to escape from with potentially devastating consequences. My only complaint is lumping Rose in the ‘damsel in distress’ role, its not all a female companion is there for. That being said, its a minor thing, something has to move the story along, right?

The artwork by Blair Shedd is absolutely fantastic, the likeness of our three heroes is spot on, easily the best I’ve seen in all of Titan’s Doctor Who comics so far. The attention to detail in each panel is phenomenal, with wonderful colouring to set the tone.

If you’re a fan of the 9th Doctor, you wont be disappointed by this first installment. Check out Titan Comics for more information.